If you’re in London and have nothing to do this weekend I highly suggest you go see the Serpentine pavilion, which is on until tomorrow. This year, it is designed by the architectural firm Selgascano and I think they did an amazing job. Really, my pictures don’t do it justice.

I was a little unsure as to how to categorize this post; but I ended up putting it in Walking Across because visiting the pavilion was an experience rather than a passive visit. It is relatively small but I spent quite a long time there, they have a small cafe set up inside so I sat and colored a whole mandala there. It was a nice feeling to be making art inside the art.

I think pictures are going to convey the feel of it better than words so I’m going to let you scroll through them (and spot me in the selfie!). Can’t wait to see next year’s pavilion now.

I picked a really bad time for my monuments walk across D.C. It was late afternoon in June but it was still unbearably hot and my phone was running out of battery (which explains the lack of original pictures in this post). I was on the verge of giving up and go home but it was my last day there so I sucked it up and did it anyway. Here’s a link to a good map so you can follow the itinerary as you read. 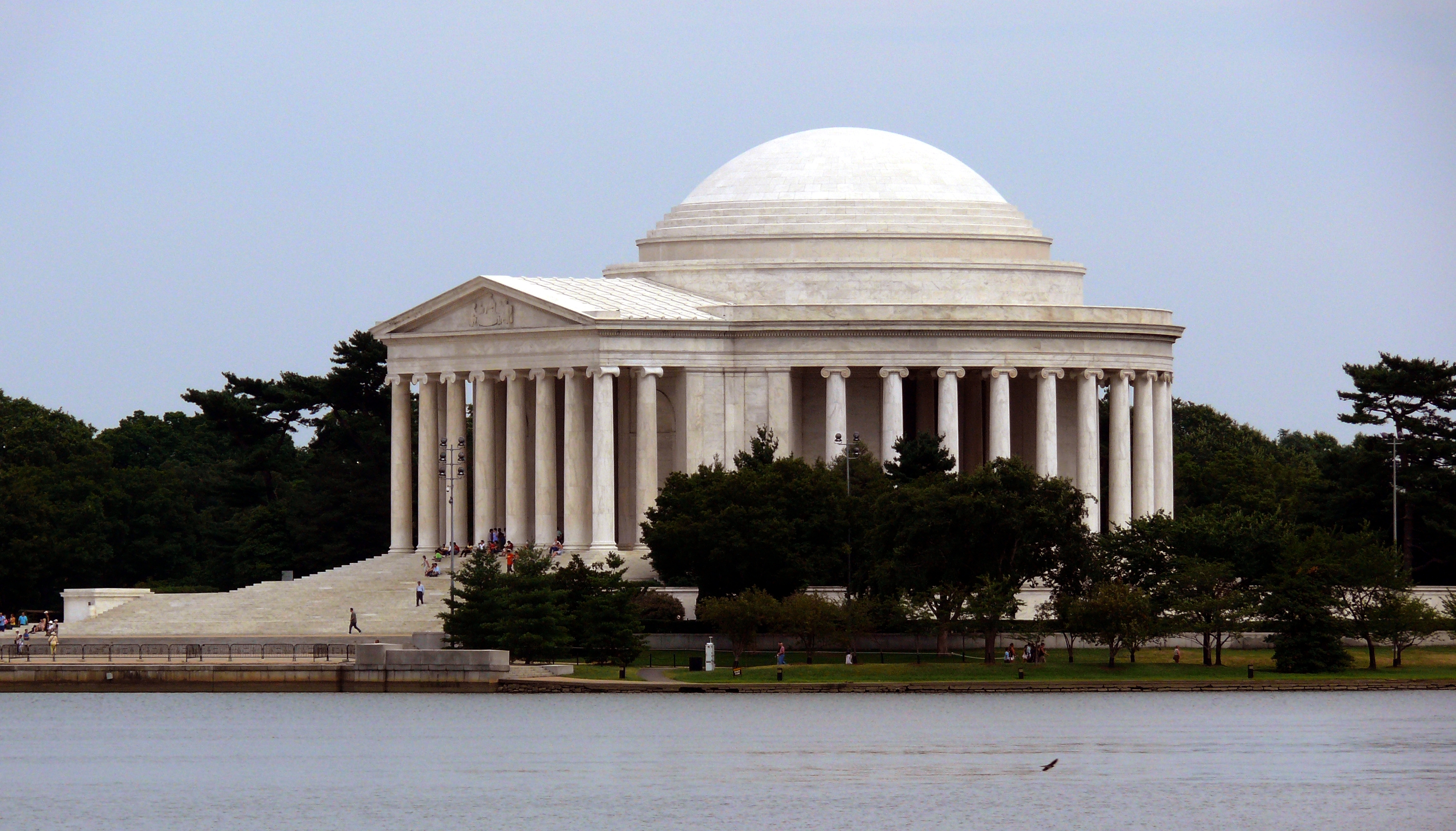 I started at the Jefferson Memorial, which is this nice neat classical building you see pictured above. There’s a statue of Thomas Jefferson and some engraving of his quotes inside.

I then walked to the Franklin Roosevelt Memorial (aka FDR Memorial). This one was probably on of my favorites. It is set on a horizontal stripe of land and mainly consists of fountains, as you can see on the above picture. It also has a statue of Roosevelt (and his dog), and some quotes engraved. I learned when I was there that the fountains are not an architectural coincidence as water was an important element for Roosevelt himself.

My next stop was the Martin Luther King Jr Memorial (pictured above). As you probably have guessed already, it’s a giant stone statue of him with some quotes. Eh. Aesthetically, I didn’t find it that pleasing.

Then, I walked through the Korean war veterans memorial, which is a field of statues of soldiers, to get to the Lincoln Memorial (pictured above). Again, it’s a classical looking building with a huge statue of Lincoln and quotes on the inside. The most enjoyable part of this monument though is the view you get from it. There is a large reflecting pool leading to the Washington monument right in front of it. I paused there for a while before finishing my walk.

At the opposite end of the reflecting pool (and after passing through the Vietnam war memorial, another field of soldiers), is the World War II Memorial, a large oval fountain with names of all the states. I also appreciated this monument a lot.

And last but not least is the Washington Monument, a tall white obelisk that you can see from pretty much anywhere in the National Mall. The whole walk took about 2 hours, with breaks at some of the monuments. I skipped the Capitol because it’s a bit off path and I got a closer look at it another day, and the White House because you can’t really get close anyway. In the end, I didn’t regret doing the walk. It’s quite a touristy thing to do but it’s a unique experience and all the monuments are quite impressive. It would have been a shame to miss it. I recommend doing it under temperate weather conditions though because it is a lot of walking outdoors. You can also visit the monuments at night when they are lit up.

Note: I’m not great with pictures, especially since these are taken from my snapchat story but I’m getting better.

I decided to visit Beacon Hill on a rainy day in Boston. It’s a good option if you want to walk around the city but do things that are less touristy than the Freedom Trail. It was a short walk, about an hour, but you can stop by to visit some sites on the way. Beacon Hill is a 19th century historic district with a lot of charm. It is quite a high end residential neighborhood located in the center of Boston.

I started at the Massachusetts State House (picture below), which you can get to by taking the T to Park Street. You can visit the State House for free. I then walked along Beacon Street, which overlooks Boston Common; and turned up onto Joy Street to reach Mount Vernon Street. Mount Vernon Street is a picturesque alley with many notable buildings, such at the Nichols House Museum (at number 55), which I wanted to visit but I got there after opening hours.

About halfway down Mount Vernon Street, I turned onto Louisburg Square, which notably housed Senator John Kerry and Louisa May Alcott. I then walked across Lewis Street to reach Acorn Street (pictured below), a tiny pedestrian cobblestone alley that is believed to be the most photographed street in America. It is filled with tiny houses that were originally inhabited by servants of the families who lived in the large houses on the main streets.

I walked on Acorn Street then reached West Cedar Street, then walked down to Chestnut street until I reached Charles street. This is the most commercial street of Beacon Hill and is filled with cute boutiques, antiques shops, and local bakeries and restaurants. I strolled along there for a while and this is where I finished my walk.

To learn more about Beacon Hill and check out the itinerary I followed, head here. All in all, it’s a charming neighborhood, probably my favorite in Boston and I really enjoyed my walk there.

One of the things I did while I was in New York was walking the High Line, an abandoned railroad that was preserved and transformed into an overground park, opening its first section in 2009. It covers the area from West 34th Street to Gansevoort Street in between 10th and 12th Avenues.

I crossed the park South to North, which took me about two hours, but I stopped for breaks and pictures. I went there around late afternoon in June, which I think is a good time because earlier in the day would have been too hot. Most of the park is quite narrow, so I covered all of it in my walk.

There were things I expected to see and things I didn’t, so in a way I had mixed feelings about this walk. First of all, I knew the landscaping was going to be great, and I wasn’t disappointed by it. The plants merge beautifully with the pathway and the cityscape; and even though the park is narrow it’s far from boring. There are different sections offering different things, such as benches, wooden lounge chairs, or refreshment stations.

It also feels different because you are moving within the city, and you come across some stunning architecture along the way. The thing about New York is that you encounter all sorts of different styles, be it in the way people dress or in the way buildings are designed. And in terms of diversity of architecture, the High Line does quite well. I found it very enjoyable to look at all those eclectic buildings and how they connect to the green spaces  of the park. On the other hand, I thought the High Line would be higher than it actually is. It doesn’t overlook anything, it’s not a pathway across rooftops, but somewhere where you can get a perspective that gives more depth than just street level.

There’s another thing I didn’t expect, but this one was more on the enjoyable part: the High Line has some really cool art exhibited all along. For example, the picture below is an installation by Rashid Johnson called Blocks, and it will be on view there until March 2016, and the one above features a physical graffiti by Damian Ortega. The High Line also offers a range of creative activities for children and adults, like for example a giant white Lego building station (which is on until September 2015). I think that this and its proximity to the Whitney Museum (which I didn’t have time to visit, unfortunately) make it a great cultural urban space.

There is one thing that bothered me about the High Line and New York in general though and that is the amount of construction there is in this place. A few sections of the parks, I had to walk under scaffolds and it really took away from my enjoyment of it. The northernmost section of the High Line is located in a more industrial zone and the views are strikingly different there. Needless to say this section was not my favorite.

Despite the extreme amount of construction and the large number of tourists that were there (it’s quite a narrow path, remember); I enjoyed my walk on the High Line and I would recommend it. They have a great website that you can check out right here for a map, a guide to the different entrances, opening hours, and more about the art and activities going on. I would suggest going there during daytime but either in the morning before 11 or in the late afternoon, because the shady spots are rare and it can get quite hot. It’s a really nice spot and it gives a different perspective on New York, so don’t miss it.